This is where we discuss figure skating and skating related items. How did you favourite skaters perform, and so on? However we never speculate on the private lives of skaters, like who might be going out with whom, because that is poison and is not tolerated here. A good guideline is that if it's not publicly announced, in the papers etc. then it's probably best to leave it alone. Is it a gray area? Then write to me and ask.
Post Reply
18 posts • Page 1 of 1

The full and detailed announcement can be read here: https://www.isu.org/docman-documents-li ... ement/file

According to the tables in the announcement, Canada is entitled to have an entry/entries in all disciplines in virtually all 7 of the events, the only exception is the men where it will be only 6 of the 7.
Last edited by Elizabeth on Fri Aug 20, 2021 2:53 pm, edited 1 time in total.
Top

A big change announced by the ISU today - no JPG event in Canada; there will be two back-to-back in France. 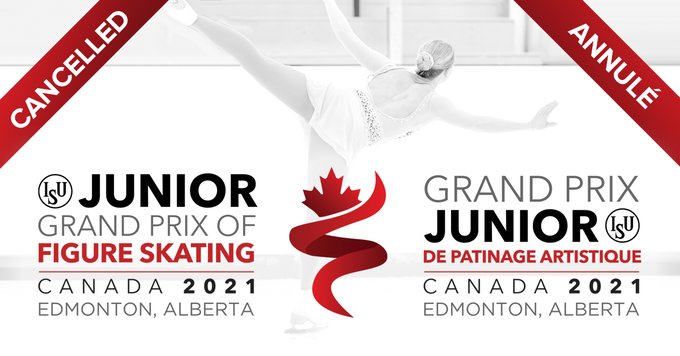 
With the ongoing uncertainty surrounding international travel due to the COVID-19 pandemic, Skate Canada informed the International Skating Union it has cancelled the second ISU Junior Grand Prix of Figure Skating, the event was scheduled to take place from August 25-28, 2021, at Meadows Arena in Edmonton Canada.

For the past 18 months, Skate Canada has closely monitored the provincial and federal health authorities’ position on the global health crisis and is committed to the health and safety of the athletes, coaches, officials, volunteers, and spectators. Like last season, due to the federal quarantine guidelines for all travellers and social distancing requirements in effect at this time, Skate Canada regretfully made the decision to cancel the event.

Due to the lack of a practice rink in Courchevel, the Pair Skating event which was planned in Canada, will move to the sixth ISU Junior Grand Prix of Figure Skating event in Gdansk (POL) on September 29-October 2, 2021.

The ISU regrets that the hosting of the ISU Junior Grand Prix of Figure Skating in Edmonton (CAN) is no longer viable, but is pleased that an alternative solution could be found to give Junior Skaters an opportunity to compete. The ISU thanks Skate Canada, the FFSG and Polish Figure Skating Association for their continued effort and support.

The Japanese Federation has announced that they will not be sending skaters to the first 3 events of the JGP.
Top

Skate Canada has announced the team for the first JGP: https://skatecanada.ca/events/#tab-id-2

This is the event that was originally meant to take place in Canada; it will the first of two to be held in France.
Top 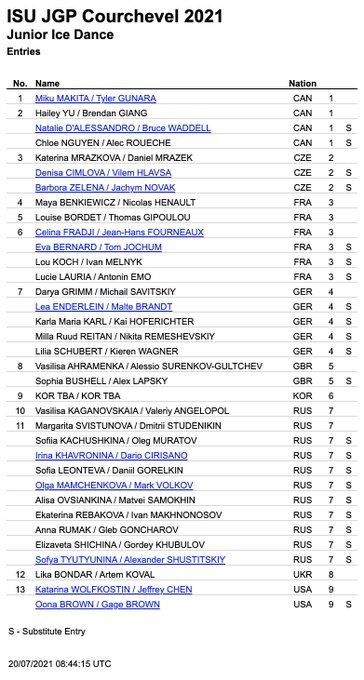 Great and thanks for the info. I now have a new laptop, HP this time, and so things should go even better better with the live streaming for me.
Top

Skate Canada has named their team for the 2nd JGP in Courcheval, France which will take place Aaugust 25-28, 2021.

As you will see below, Kaiya plus Miku & Tyler will be staying in Courcheval to do a 2nd consecutive JGP and will be joined by Wesley plus another dance team.

And now the ISU has posted the entries (and official substitutes) for Junior GP #2 (the second of the two events taking place in Courcheval):
http://results.isu.org/events/fsevent00110954.htm
As with event #1, there will be no pairs competition at this one.

The entries and (lots of) official substitutes for JGP #3 in Kosice, Slovakia, Aug. 31-Sept. 4, have now been posted - the first event with all four disciplines: http://results.isu.org/events/fsevent00110955.htm 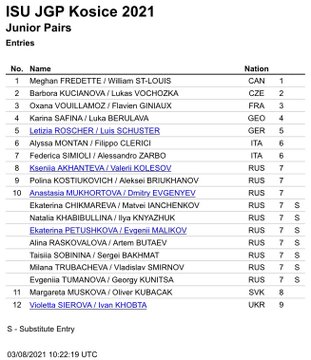 The current pandemic restrictions and issues are having an impact on the Junior Grand Prix Final, e.g. qualifying for it or if it will even take place. Read more here: https://www.isu.org/inside-isu/isu-comm ... -2418/file
Top

Some late news as posted on Twitter:
"The Russian Figure Skating Federation has announced that it will not be sending any skaters to the first two JGP Figure events in Courchevel due to France's 10-day mandatory quarantine for all Russian arrivals into the country"

Another post:
"Russian skaters will no longer be able to take part in either Junior Grand Prix in Courchevel due to Russia being placed in the red zone. Skaters would need to undergo a 10 day quarantine as they are considered unvaccinated. The ISU is working on redistributing their quotas."

It appears that the French are not recognizing the Russian vaccine, even if the skaters have actually received it. 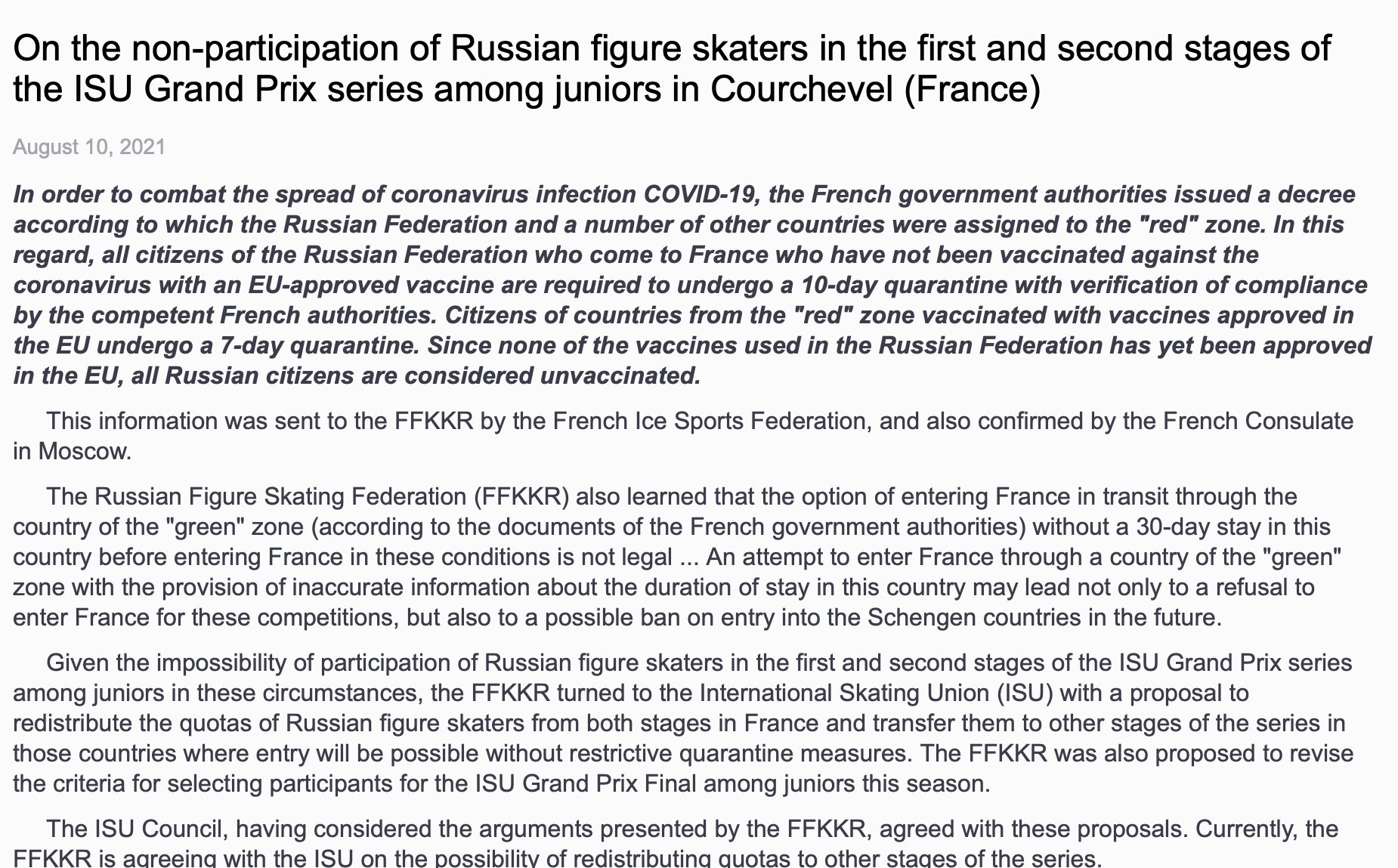 As a result of the issue with the Russian skaters at the events in France, there are now two extra Russian entries in the three disciplines that they would have participated in at Courcheval (Men, Women & Ice Dance) for the event in SVK: http://results.isu.org/events/fsevent00110955.htm
Top

The entries in all four disciplines have now been posted for JGP event #4: http://results.isu.org/events/fsevent00110960.htm

There are extra RUS entries, as there were for event #3, apparently to resolve the issue of no Russian participation in events #1 & 2 in France. 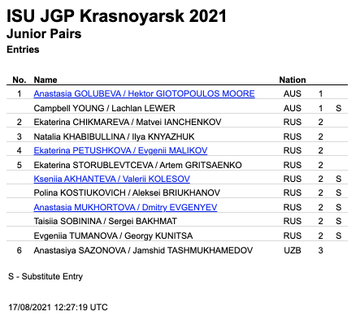 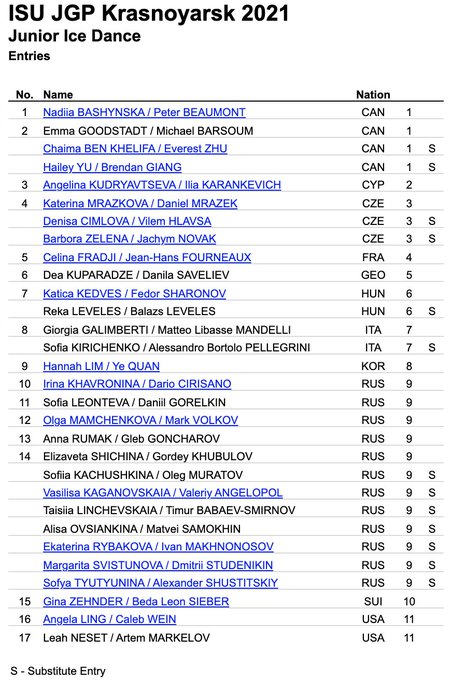 We now have the official entries and substitutes for event #5, the LjubljanaCup: https://t.co/ZgomrJ2Fdv?amp=1

NOTE: I have been starting new threads for the individual events as they take place but will keep this thread "alive" for general announcements/comments, etc.

Today, the Japanese Skating Federation has announced that they will not be sending any skaters out to any Junior Grand Prix events due to the quarantine requirements when they return to Japan. Going into quarantine would, of course, impact training.

They are also not going to participate in, at least, the early Challenger events, meaning that Satoko Miyahara will withdraw from the Autumn Classic.
Top 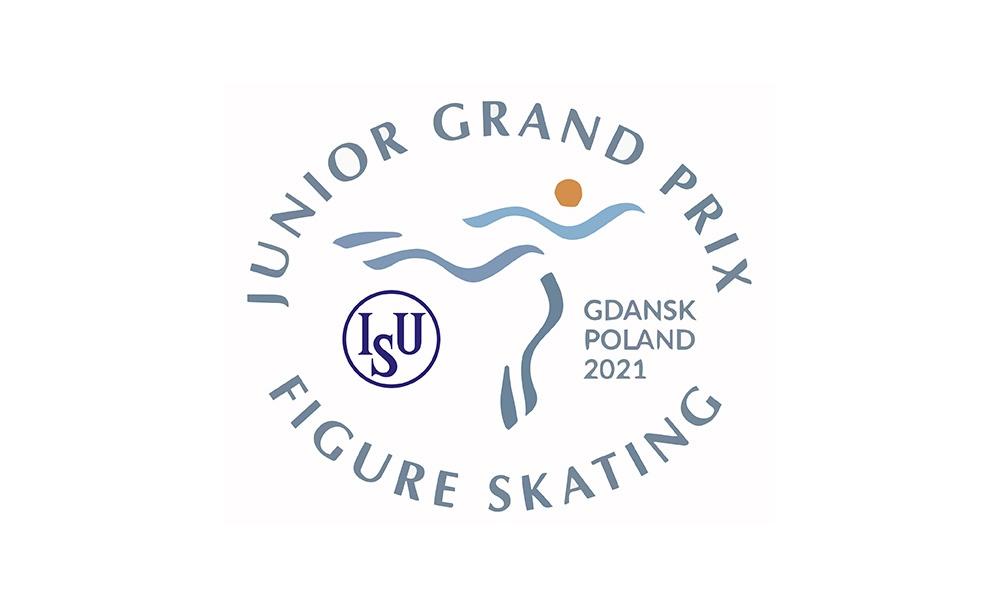 The entries in all four disciplines as well as the time and practice schedule have now been posted for Event #6 of the JGP - Gdansk, POL - 29 Sept. to 2 Oct.