This is where we discuss figure skating and skating related items. How did you favourite skaters perform, and so on? However we never speculate on the private lives of skaters, like who might be going out with whom, because that is poison and is not tolerated here. A good guideline is that if it's not publicly announced, in the papers etc. then it's probably best to leave it alone. Is it a gray area? Then write to me and ask.
Post Reply
14 posts • Page 1 of 1

Looking ahead (already) to next season - here are the dates & locations (if offically announced) of the GP events:
Junior Grand Prix: Grand Prix:
It was originally announced that the Grand Prix Final for juniors and seniors would be held in Strasbourg, FRA but a change has been announced today by the ISU:

There are already some complaints online about this because of the sight lines in the arena.
Last edited by Elizabeth on Sat Sep 21, 2019 3:09 pm, edited 2 times in total.
Top

We already knew that Kelowna, BC would host Skate Canada in October. Today the USFS announced the location of Skate America - Las Vegas!


U.S. Figure Skating announced the selection of Orleans Arena in Las Vegas as the host for 2019 Skate America, Oct. 18-20, 2019. The international event will be the first of six stops on the International Skating Union (ISU) Grand Prix of Figure Skating Series.

The competition will mark the first Skate America event to be held in Las Vegas. Orleans Arena, which is adjacent to the Orleans Hotel and Casino, hosts prominent sporting events concerts and other types of performances. Tickets for Skate America will go on sale later this spring.

"U.S. Figure Skating is excited Skate America will head to Las Vegas next season," U.S. Figure Skating Executive Director David Raith said. "We think this will be an outstanding destination for both American and international figure skating fans.”

“The Orleans and Boyd Gaming are excited to host the 2019 Skate America Competition. This continues our proud tradition of hosting Olympic style events, and we cannot wait to have these world class athletes competing in our venue” Rex Berman, Executive Director of the Orleans Arena.

“Las Vegas is excited to add Skate America to our incredible line-up of sporting events,” said Lisa Motley, director of sports marketing and special events for the Las Vegas Convention and Visitors Authority. “We’re happy to welcome some of the world’s greatest skaters to the destination and look forward to showing the sport and its fans an amazing time.”

The event will feature three days of competition in ladies, men's, pairs and ice dance. The field will include 60 competitors, including Olympic- and World-level athletes.

The complete list of athletes selected to compete at 2019 Skate America and all other 2019 ISU Grand Prix of Figure Skating events will be announced in June.

For more information about the event and to sign up for ticket updates, please visit www.2019skateamerica.com.

Las Vegas would be fun! Too bad I am away on a trip and can't make neither Vega nor Kelowna

The announcements were made today about the skaters assigned to each of the senior GP events.

Yeah, let's get going already! And then there is The Battle of the Blades, lots of good skating to while away the Fall and Winter.
Top

Elizabeth wrote: ↑
Thu Jun 20, 2019 1:28 pm
The announcements were made today about the skaters assigned to each of the senior GP events.

Perhaps because of the demands of Vanessa's involvement in Battle of the Blades, she and Morgan Cipres are now shown as having withdrawn from both of their GP events: https://isu.org/docman-documents-links/ ... vents/file

According to this press release from the French Federation, looking at their development leading to the 2022 Olympics in Beijing the 2022 Worlds in Montpelier, FRA, Vanessa & Morgan will only compete at the French Nationals & Europeans this season 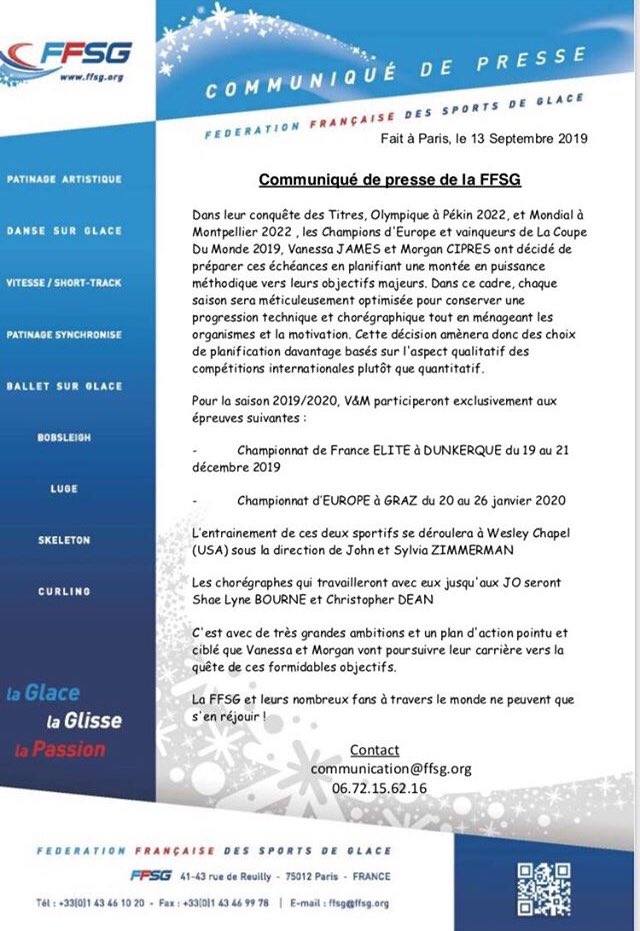 The latest entries, by discipline, in the senior GP series (as of Sept. 17th): 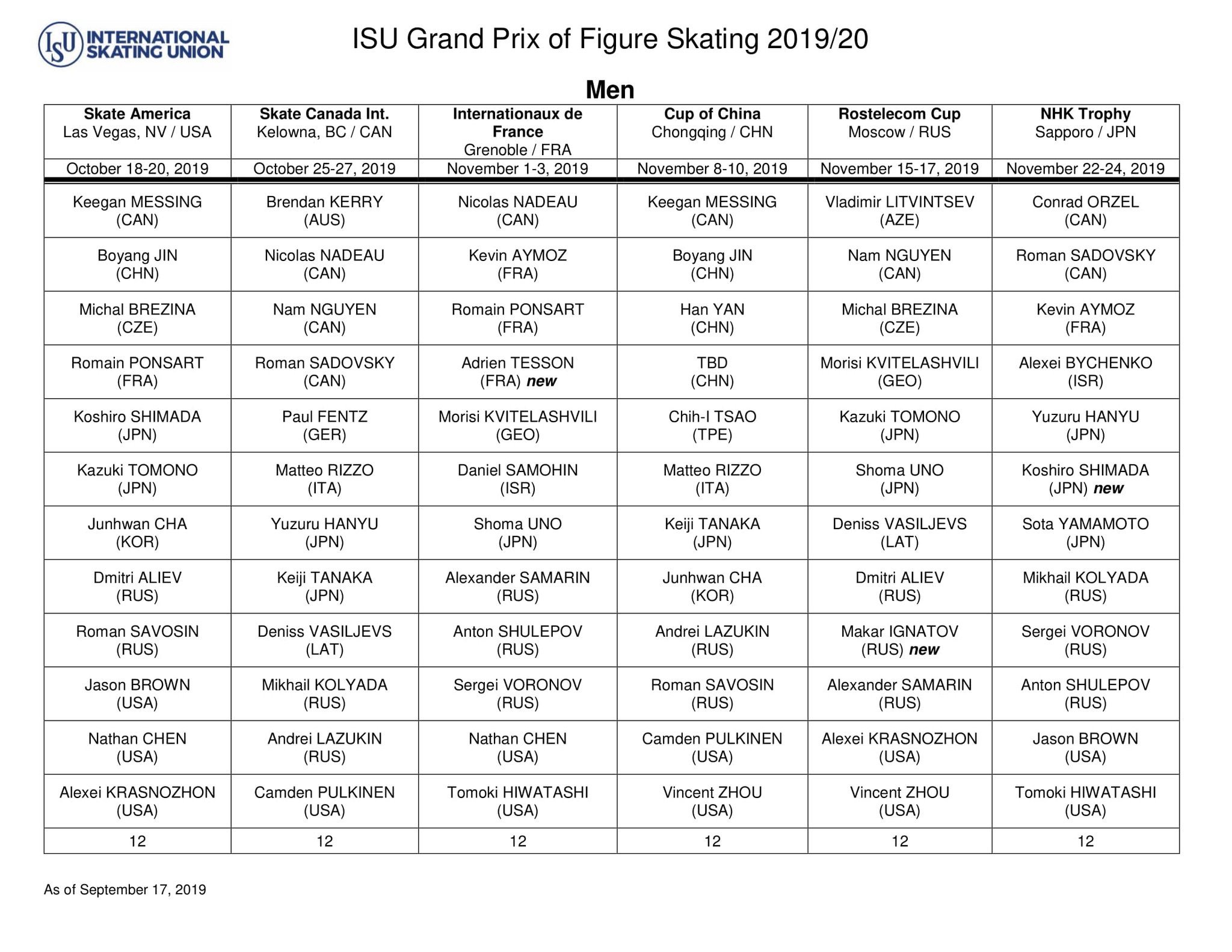 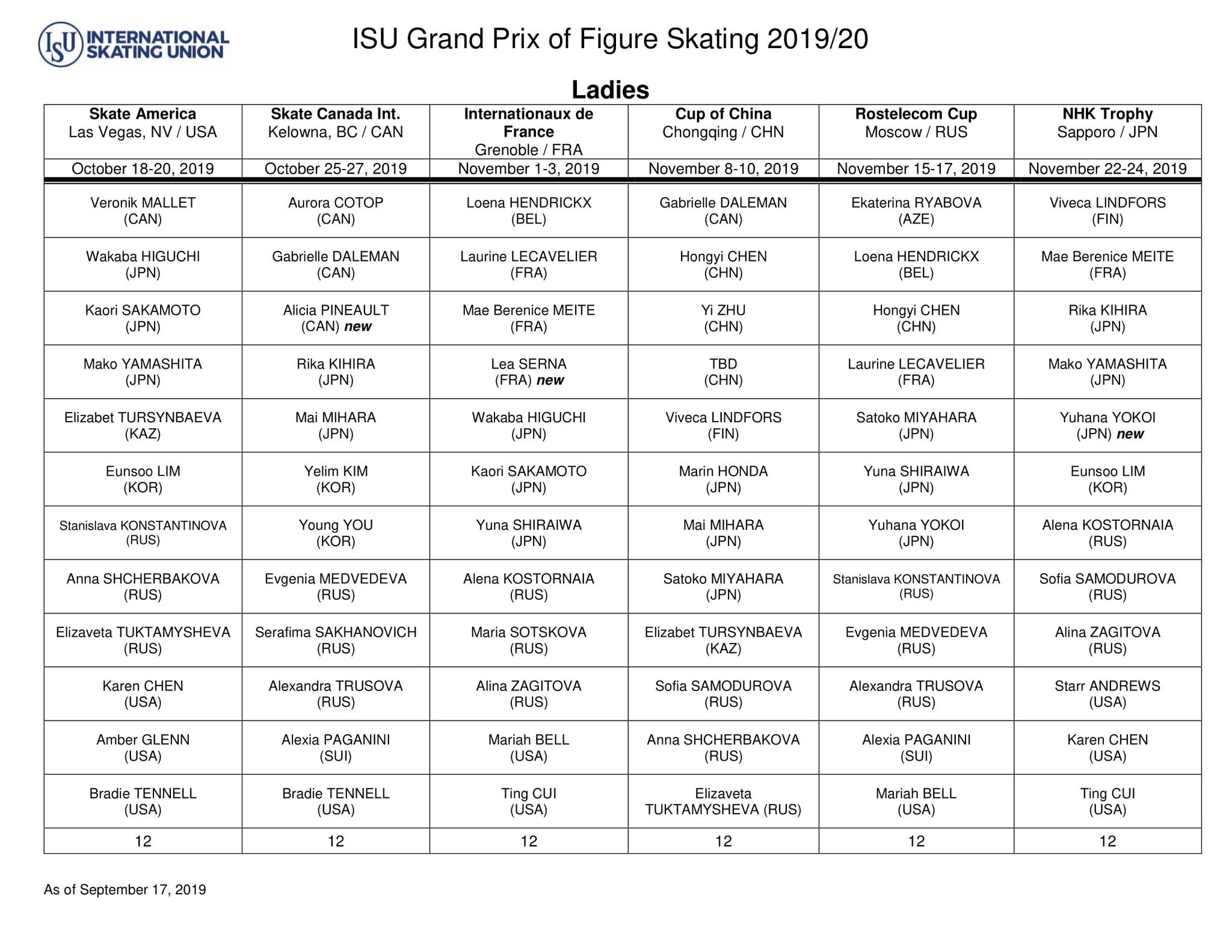 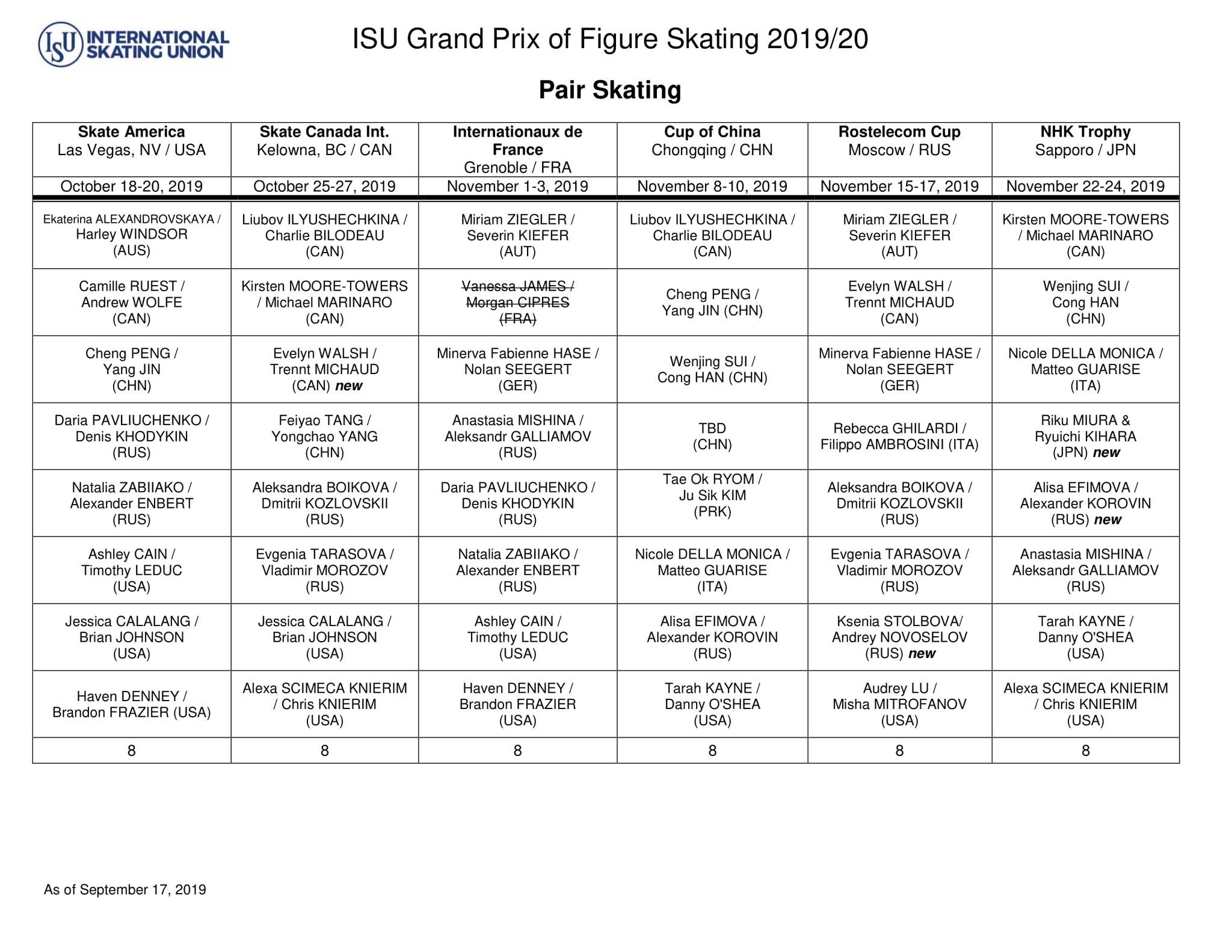 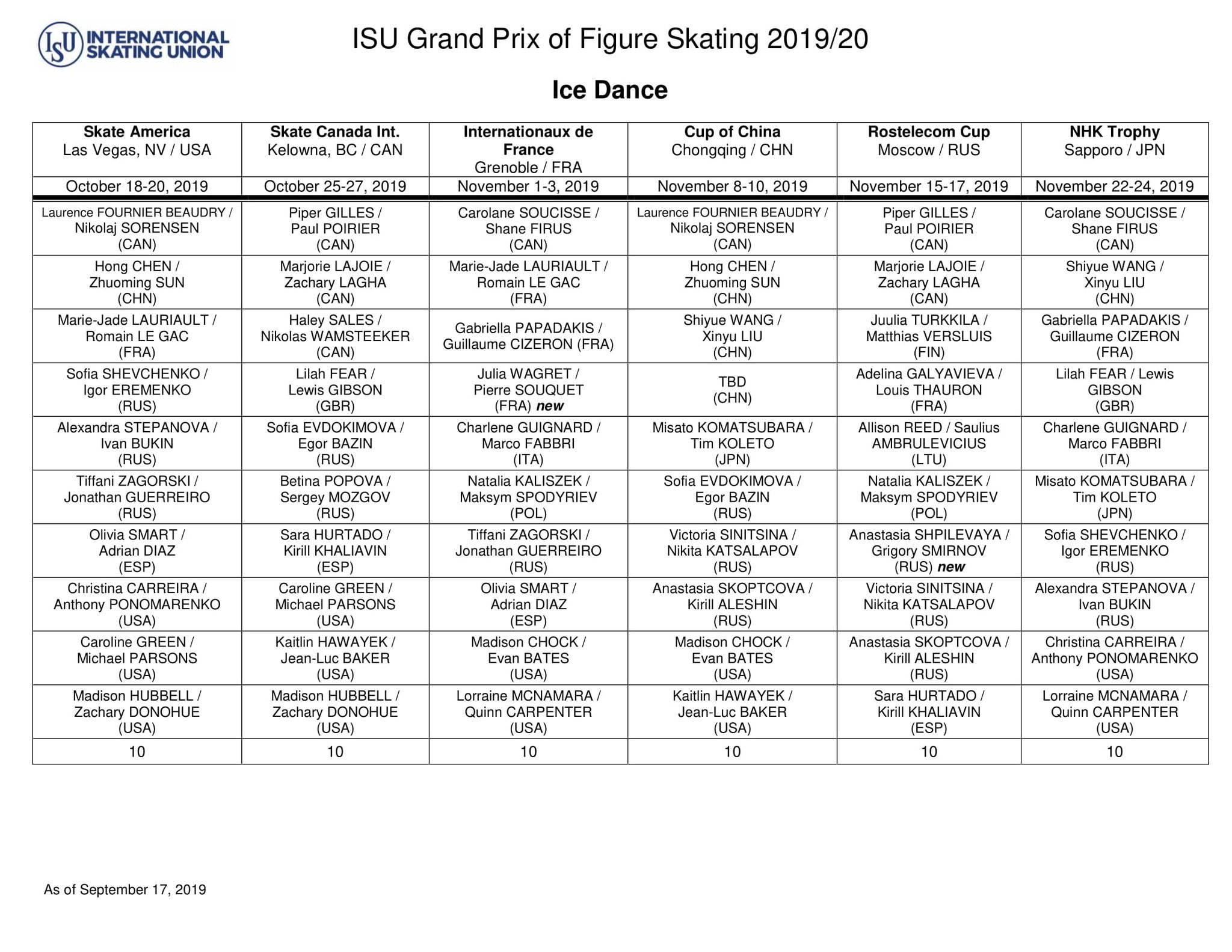 The STANDINGS in the Junior Grand Prix, as updated after each of the 7 events can be found, by discipline, at each of the links below: 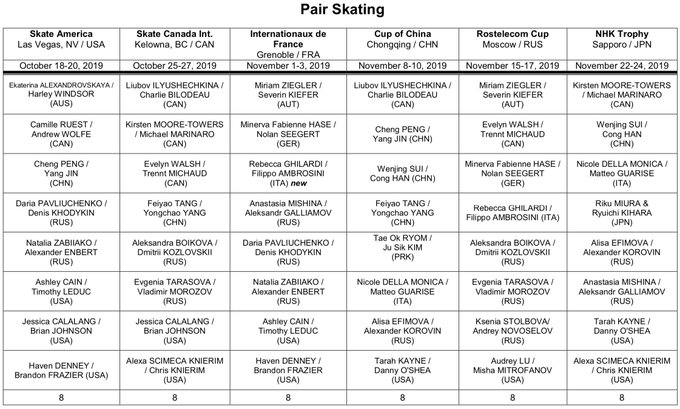 Another update today - according to IFS Magazine about the current World bronze medalists:

Natalia Zabiiako/Alexander Enbert withdraw from Grand Prix Series. "...with the conclusion of the doctors, Alexander Enbert temporarily suspends competitive activity and for this reason the skaters will not perform at the stages of the Grand Prix series." 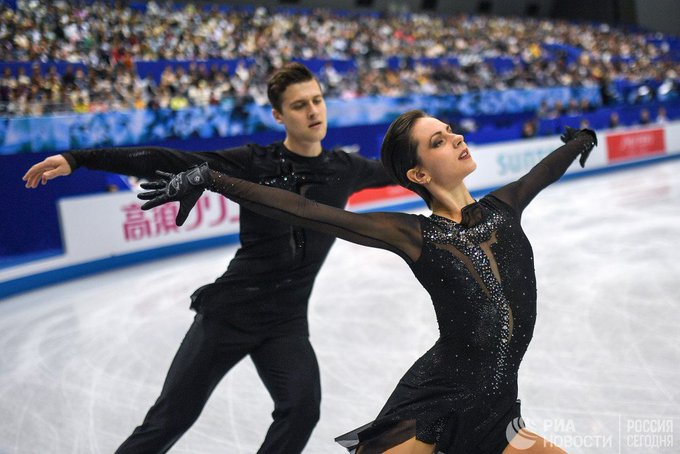 The Russian federation has announced that Mikhail Kolyada will not be competing at this time as he is undergoing medical treatment. He is to have surgery related to his ongoing issues with sinusitis and will miss at least the GP season. He was assigned to Skate Canada International.
Top

Now that the senior GP is well underway with two events completed, here are the links to check the standings, by discipline: The final qualifications for the GPF in Torino will be determined by the end of the six events but there are some that are already looking certain, like Hubbell & Donahue in ice dance.
Top

Elizabeth wrote: ↑
Wed Oct 30, 2019 7:30 pm
Now that the senior GP is well underway with two events completed, here are the links to check the standings, by discipline: The final qualifications for the GPF in Torino will be determined by the end of the six events but there are some that are already looking certain, like Hubbell & Donahue in ice dance.

Three competitions in the GP series have now been completed and the fourth one is now underway. Some additional qualifications for the GP Final will likely be determined this weekend.
Top
Post Reply
14 posts • Page 1 of 1