This is where we discuss figure skating and skating related items. How did you favourite skaters perform, and so on? However we never speculate on the private lives of skaters, like who might be going out with whom, because that is poison and is not tolerated here. A good guideline is that if it's not publicly announced, in the papers etc. then it's probably best to leave it alone. Is it a gray area? Then write to me and ask.
Post Reply
11 posts • Page 1 of 1

Some cities still to be announced....

A 10 minute interview with Tessa & Scott on CTV: https://www.ctvnews.ca/video?clipId=1656310 (You have to wait through 4 ads to get to the actual video.)
Top

I've been told it's coming to my hometown again. I'll try to attend, but I have other commitments that will likely interfere. I see they are "making" the Thunder Bay people go to Sudbury again. I really wonder why. I know that last time they weren't "able" to accommodate their lights and equipment they were bringing. Perhaps it's the same scenario. Maybe it's just me, but it would be nice for them to hit some different cities that didn't get the tour last time. I guess they ARE, but it just seems some of the same cities are getting this new tour.
Top

The full list of tour locations for this year can be found here: http://rocktherink.com/

There are definitely some locations that their Thank You Canada Tour didn't get to, including at least one location in the USA. Their tour last year generally did not go to cities where Stars on Ice toured; this year that has changed but they held off making the announcements for those cities (& putting the tickets on sale) until after the CSOI show had taken place.
Top

Ok, thanks. Once I figure out what I'm doing, I'll see about going to the show. I don't think there will be the same rush for tickets like last year. I just won't get closer seats, unfortunately, if I'm able to go. If this was in my home city, it would be so much easier and I'd go for sure.
Top 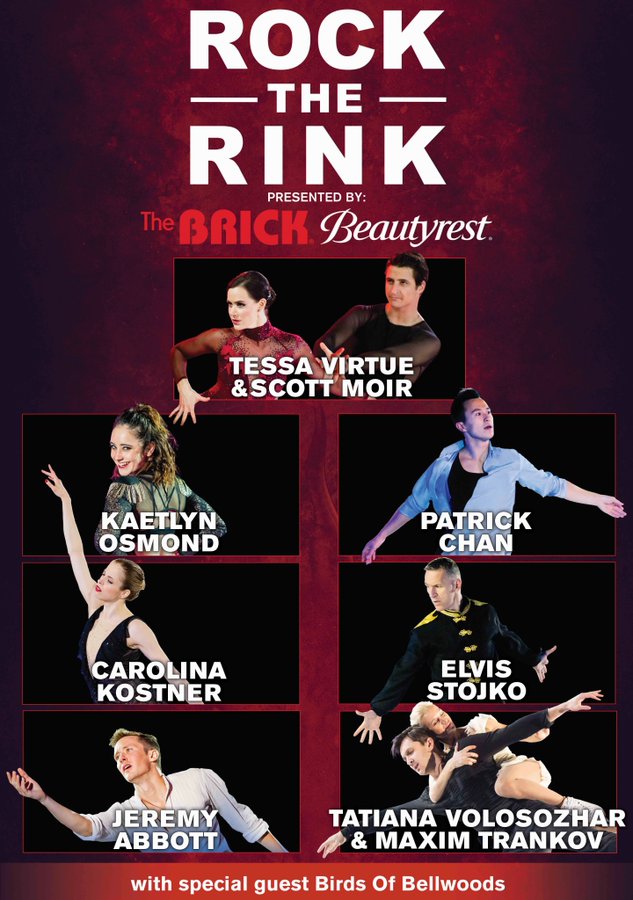 Also our tickets are being upgraded to rink-side which will be a first for me! Go Elvis!!

my brother-in-law is taking pictures again, this time from a lower level. I’m not sure if I’ll have copies of these as he’s taking them for the Keystone Centre! Whoohoo
Top

Enjoy! Based on reports from other cities, the first 25 to 30 minutes is a concert by their musical guests followed by an ice-make. I'm told the actual skating starts an hour into the show but it's worth the wait

Sorry, I've been in transit.

Yes, the group is from T.O. and called Birds of the Bellwoods. We thought they were very good and we had a front row center view. They played first, like you said, and then later played during some of the skating. My first question, was where are the Bellwoods?? lol. The only thing I could think of that's close is "Belleville".

Here are a few shots from Sunday night.

ONE LAST DANCE - the very last show in the tour and the last performance by Tessa and Scott before their retirement is taking place in St. John's, Newfoundland tonight.

Here's an article with some thoughts about the show, as seen in Laval, Quebec recently - it includes some videos: http://www.twofortheice.com/rock-the-ri ... f-skating/

As posted by CBC Olympics on Twitter with a link to the item above:

Don't cry because it's over, smile because it happened

The end of an incredible career that we've all been fortunate to watch, enjoy, and cheer for!
Top